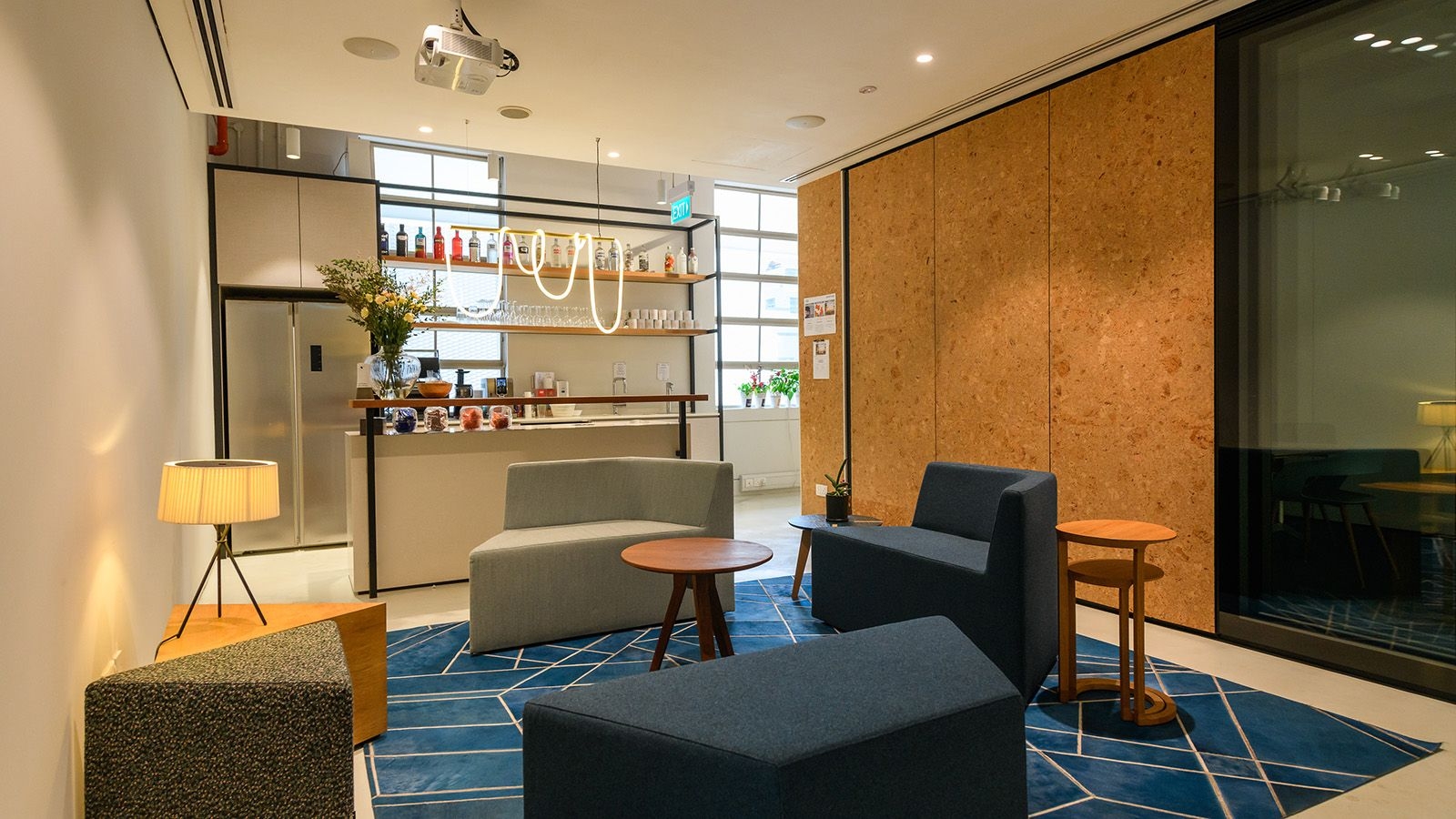 TO say that work life has changed since the Covid-19 pandemic started is perhaps an understatement. Workers who used to spend five days a week in the office have gotten used to working entirely from home, until the recent calls to return to the office on some days, if not fulltime.

Now with community cases rising again, the rule now is that no more than 50 per cent of employees who are able to work from home should be in the office at any one time, down from 75 per cent.

Under such fluid working arrangements, the hybrid office is now seen as the new normal.

While still a relatively new concept, Aalok Agrawal, senior vice-president and general manager at P&G Consumer Healthcare, has had a headstart to this working arrangement.

When he joined the company's Singapore office in 2001, employees were given a work from home allowance and told to spend a day a week working from home. "The idea took some getting used to, but it helps that everyone in the office was doing the same," says Mr Agrawal.

He also recalls that an open plan office and hot desking, features more commonly found in tech companies back then, were also the norm at P&G.

Today, employees get to decide when they want to come in to the office and they are free to work from anywhere in the office. "Over the years, P&G's leaders have gotten used to working in a hybrid environment which allows for more flexibility," says Mr Agrawal.

P&G may be ahead of its time when it comes to hybrid workplaces, but many companies are catching up.

Lim Sio Hui, spokesman for Conexus Studio design firm, says "clients have been leaning towards hybrid offices in the past year".

When pitching design proposals that either feature a hybrid workplace concept or one with traditional fixed-desk layout, she says that more clients are picking the former.

"Not only does the hybrid office offer organisational agility, save on space, and includes features that are tailored for our modern work-life needs, the change also allows employees to break out of their cubicles and work in a more dynamic and hospitable environment that elevates employee productivity and satisfaction," says Ms Lim, whose firm recently completed BBC Studios and BBC Global News Singapore's office with hybrid work in mind.

Hot desking options aside, hybrid offices come with more collaborative spaces of different sizes, small meeting rooms with video conferencing capabilities, and an increase in the use of modular furniture and operable walls that allow spaces to be easily reconfigured.

It is not just design companies who are seeing a shift toward hybrid offices. Japanese office furniture brand Okamura is catering to this growing trend too.

Shawn Eng, its regional business development director for APAC, says the company is no longer focused on producing task chairs that are used in offices. Instead, it is moving towards producing chairs suitable for both the office and the home.

Okamura is also expanding its range of furniture that is suited for activity-based work, such as stools, poufs and moveable writing boards. "There's no doubt that hybrid work places are here to stay, although the pickup rate might differ among industries and we want to be able to meet the change in demand," says Mr Eng.

Narita Cheah, co-founder of Paperspace Asia which fits out offices, says while hybrid workplaces are not a creation from the pandemic, "clients have moved beyond deliberating whether or not they want a hybrid office. They want to get one now," she says.

She adds that flexible working is definitely here to stay and "spaces need to be enabled for that".

Here are two places to check out.

They say the proof is in the pudding and the best way to experience what it is like to work in a hybrid office is to spend a day or even up to a week in one.

Paperspace Asia, an office design specialist,recently launched its HybridWork Lab, a hybrid office set up on its premises at the National Design Centre.

For a fee, both individual users and corporate teams can have a first-hand experience of the various design solutions and possibilities set within a hybrid office, complemented by specially curated workshops and networking events. Those who like the hybrid office experience can then hire Paperspace Asia to do their offices.

Narita Cheah, co-founder of Paperspace Asia, says: "Design is an intrinsic and invaluable component of how business is conducted. With the HybridWork Lab, we move away from the passive acceptance of work environments."

The HybridWork Lab experience begins at the foyer just outside the Paperspace Asia office, where different types of seating configurations have been set up.

For example, there are tiered seats for those who prefer a more casual setting, as well as large tables suited for hot desking. In another corner stands a high table with a bench for those who would rather stand while they work. The foyer area not only offers varied seating options, but also showcases different workplace accessories such as dimmable table lamps and soundproofing boards.

Inside the Lab itself, users can start their day by grabbing a coffee at the pantry area which has been comfortably decked out, before picking out a seat at the hot desking spaces.

There's also a meeting room for more serious group discussions, and smaller tables suited for brainstorming with colleagues. For moments where peace is needed, the HybridWork Lab also has seats in quiet corners suited for work that requires focus and concentration. Those who need to make private phone calls can do so in phone booths and, to beat the post lunch slump, they can chill out on a hammock at the balcony.

While the office was initially set up as a co-working space when it started in 2017, Ms Cheah has put in new features that now make it more suited as a hybrid workplace. These include putting in high tables so users can casually stand around and chat before their meetings, the installation of phone booths to provide soundproofed spaces, and turning the previously unused balcony into a small outdoor chill out space.

"We wanted to create a diversity of spaces to suit the type of activities that users will engage in," says Ms Cheah.

Like most companies during last year's Circuit Breaker period, about some 180 Ikea employees, mainly those within desk bound jobs, spent their time working from home. And when they returned to the office some months later, it was to a brand new space.

Ikea took the opportunity to redesign its corporate office at its Tampines store because "we recognised the need to change the way we worked when it was time to return to the office," says Christan Carlsen, regional manager for Ikea for Business, the Swedish furniture retailer's B2B arm.

Gwinna Wareewanish, its head of interior design, says "as with any interior design project, we started with the co-workers' needs and daily activities in mind. Then we designed the spaces and created features accordingly, thereby improving the spaces to meet, work, think and relax." The design team also had to keep safe distancing measures in mind.

Instead of grouping staff into different departments and having them sit together, the new office layout allows staff to sit wherever they want to instead, based on their work activity. The office only has hot desks.

There are three work areas to choose from, the first which has desks that are large enough to accommodate two monitors for those whose work requires multiple screens; the second area has tables grouped together; and the last is filled with height-adjustable desks for those who prefer to stand when they work.

For those who need a space for concentration, there are small "homes". Shaped like a house, the space is big enough for one user. Ms Wareewanish has also introduced more smaller meeting rooms and these have been fitted with video conferencing features, especially handy now for staff in the office to communicate not only with their overseas colleagues, but their colleagues at home.

It is not all work and no fun. A new pantry that is larger than before now takes centrestage. Other facilities that have been put in include nursing rooms, and a changing room where staff can store their workout gear.

Companies who are interested to redesign their office can request a private viewing of the Ikea for Business office, and already, some logistics and retail firms have done so.

"Clients don't have to redesign their office from scratch, but they can always take Ikea's ideas and incorporate them into their existing office," says Mr Carlsen.

A new age for office space: What happens to the office market when offices adapt?

By Nisha Ramchandani, Business Times / 15-May-2021 According to URA, rents of office space in Singapore's central region rose 3.3 per cent quarter on quarter in Q1 2021 Read More

By Tay Suan Chiang, Business Times / 14-May-2021 Offices that give employees plenty of flexibility are the new normal. Read More

By Nisha Ramchandani, Business Times / 04-May-2021 Tanglin Shopping Centre, which is mounting its fourth attempt, is gunning for a reserve price of S$785 million Read More