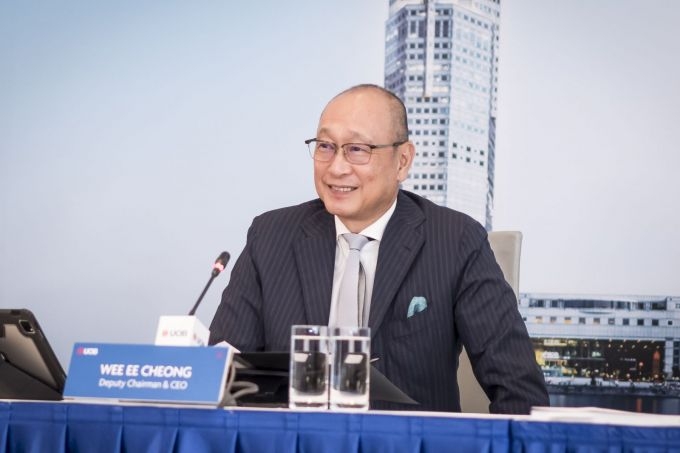 UOB: U11 -0.86% is considering downsizing its office space as hybrid work arrangements gain momentum, but the bank's chief executive officer and deputy chairman Wee Ee Cheong does not expect too significant a reduction in real estate.

Responding to a shareholder's query at the bank's annual general meeting (AGM) held virtually on Friday, he said: "With digitalisation and flexible work arrangements, I think there is some flexibility for us to extract the best of both worlds. I think there could be some drop in demand in terms of office space, but the reduction may not be as significant."

UOB's head of group human resources Dean Tong added that the bank has been looking at paring office space since early 2020, prior to the Covid-19 pandemic, with an internal property group weighing options to balance employees' welfare and the economics of space.

"We do expect that there will be some reduction. But the main point we are doing this, is (for) improving the welfare of employees as well as looking at maintaining productivity with the new work arrangements," he said.

According to the bank's latest annual report, as at end-2020, some 200,000 square feet (sq ft) of office space has been transformed into "high-performance workspaces", which provide flexibility for individual work, group meetings and other creative activities.

UOB said last November that the majority of its 26,000-strong workforce will have the option to work remotely two days a week once Covid-19 restrictions are lifted.

In Singapore, DBS: D05 -1.5% is said to be surrendering about two-and-a-half floors, or 75,000 sq ft, of its space in Tower 3 of the Marina Bay Financial Centre; OCBC Bank: O39 -0.66% said during its AGM on Thursday that it will be reviewing its office space requirements and may cut down on its number of branches.

Standard Chartered Bank is reportedly considering slashing its footprint in the city state by four floors, or the equivalent of about 80,000 sq ft.

Shareholders' queries during the meeting, which lasted slightly under an hour, covered a range of issues, including board renewal and sustainability.

In particular, independent director Lim Hwee Hua's decision to step down after serving on the board for almost seven years sparked questions on whether the bank will appoint another female director.

Ms Lim, who was appointed a director in July 2014, was the only female on the board of 11 directors prior to her retirement on Friday. She had also previously served in the public service and was the first woman to be appointed a full Cabinet minister in 2009.

Steven Phan, an independent director who chairs the nominating committee, said the board has identified "several well-qualified candidates", including several women, who are suitable for appointment as directors.

The board is at an "advanced stage" in its internal processes and expects to appoint at least one female director this year, he said.

Selection is based primarily on merit, Mr Phan noted, with "due consideration for the benefits of diversity". "We look for diversity not just in gender, but also in skills, in experience, in regional and international exposure, tenure and age; (these are) among other criteria considered in the search process."

Mr Wee, who chaired the meeting as UOB chairman Wong Kan Seng was on medical leave, also highlighted that the importance of sustainability has become more apparent with Covid-19.

Therein lies market opportunities too, he said, noting that of the estimated US$3 trillion market in developing and emerging economies across Asia, some 70 per cent is estimated to be derived from the development of smart cities, energy and material efficiency technologies.

UOB's U-Solar programme, which connects Asian businesses and individuals with the lender's solar company partners, has helped reduce more than 77,200 tonnes of carbon dioxide-equivalent greenhouse-gas emissions since its launch in October 2019. This translates, roughly, to taking 17,000 cars off the road or to planting 1.3 million tree saplings.

"We want to help our customers going through these transitions, and at the same time, to shift their behaviours in the long term to achieve a multiplier effect across the region," Mr Wee said.

Also speaking at the meeting on Friday, Mr Lim said the bank has seen "a very large increase in demand" from its customers in the areas of green and sustainability-linked financing.

With its focus on impact investing, the bank has also reached 16 million low-income individuals through investments in agriculture, healthcare and micro-finance across the region. It is now drawing up plans to achieve net-zero carbon emissions and will announce these plans in due course, he said.