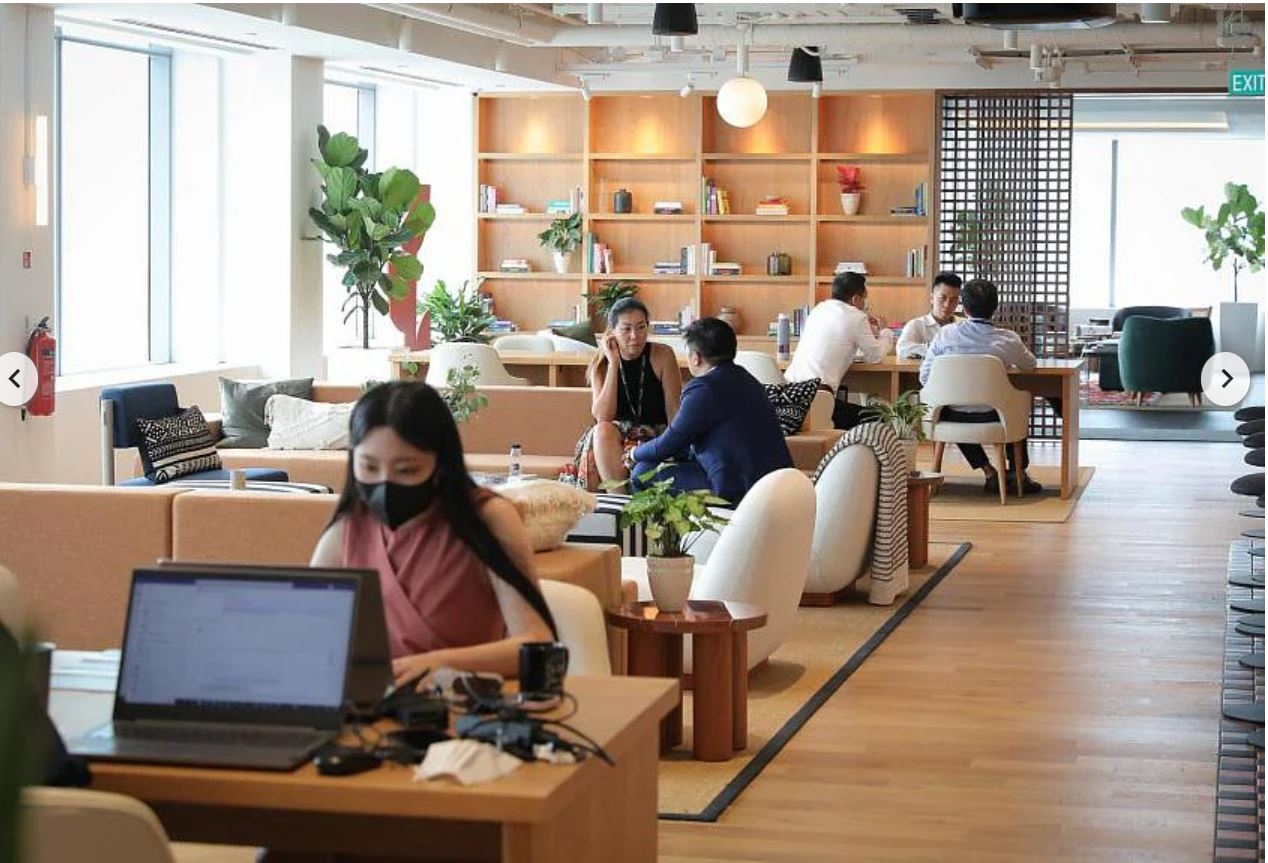 Mr Balder Tol, WeWork's general manager for Australia and South-east Asia, gave this update as it welcomed the second batch of tenants at its facility.

The New York-based firm marked the completion of 17 of 21 levels of the facility, its flagship, which occupies the whole former HSBC building and offers firms flexible office space as well as amenities such as a rooftop bar, gym and cafe.

"A shortage of Grade A office space coupled with a need to redesign offices due to hybrid work would also bolster co-working demand. Occupiers can utilise co-working spaces as interim swing spaces as they search for a suitable office space or wait for their permanent office to be renovated."

Singapore, which registered annual growth rates of 30 per cent in revenue and 25 per cent in occupancy in the second quarter for the company this year, is one of WeWork's fastest-growing markets.

Tenancy for its complete Singapore portfolio is 87 per cent, said Mr Tol.

This 14th addition to its portfolio here will likely widen the gap between the market leader and the competition, going by a research report by C&W last December.

Based on operating co-sharing facilities in 2021, WeWork led the market with 19 per cent share, followed by IWG with 18 per cent, and JustGroup with 16 per cent, the report said.

At 220,000 sq ft, WeWork's newest addition is three times larger than the average floor size of its typical co-working facilities. It has 700 spaces in 150 cities in 38 countries.

"As part of our long-term plans, we will rejuvenate and transform our city centre, and make it a vibrant place to work, live and play," she said.

She also encouraged WeWork to move beyond the central area - although the firm has said that it does not plan to - adding that the Government is backing both flexible work arrangements and co-working facilities in the heartland.

Singapore's heartland areas are set to become more vibrant while the city centre will become less congested with a smaller work crowd under its 50-year development masterplan, she said.

Public servants, such as parts of GovTech, are already using co-working spaces, she added.

Tuesday's opening marks a milestone for the 22-year-old company, which is slowly pulling itself up after a botched public listing in 2019 and the ousting of its founder Adam Neumann.

Under new chief executive Sandeep Mathrani since February 2020, WeWork is projecting to turn profitable by the end of this year. Mr Mathrani has said that the company, with 4,400 employees worldwide, plans to turn cash flow positive by next year.

The company has made Singapore its regional headquarters, and employs 170 staff here.

Mr Casey Mace, the US Embassy to Singapore's deputy chief of mission, voiced the American government's backing of WeWork in a speech at the ceremony.

Calling it a "partner", he said: "It's great to be here with WeWork because they are some of the leaders in this industry. And they see Singapore the same way that the American government sees Singapore."

"Over US$300 billion (S$421 billion) in foreign direct investment from the United States is here in Singapore, making us the largest investor in Singapore by far than any other country, including China," he said.

By Nisha Ramchandani, Business Times / 17-Oct-2022 Cushman & Wakefield data shows that CBD Grade A office rents rose 1.8 per cent quarter-on-quarter to S$10.35 per square foot (psf) per month in Q3 2022 while vacancy rates tightened to 3.6 per cent from 5.1 per cent in the last quarter Read More