Office leasing activity to take a hit, shadow space to rise next year

IN THE face of a weakening global economy and a slowdown in the tech sector, office leasing activity in Singapore is poised to shrink in 2023.

Property consultants also expect an increase in shadow space – excess space on an existing lease obligation that a tenant would like to give up by finding a replacement tenant for the landlord.

Nevertheless, with the relatively low office supply – after factoring in buildings that will be demolished for redevelopment – 2023 office rents are likely to remain firm with a much smaller rise than in 2022, said Savills Singapore’s executive director of commercial leasing, Ashley Swan.

“The second half of 2022 has seen the easing of demand for office space, with economic headwinds and disappointing financial results leading to ‘belt-tightening’ and a pause in hiring,” he noted.

Up to the third quarter of 2022, CBRE Research had been projecting a 4 per cent to 5 per cent rise in the average monthly rental value of its CBD Core (Grade A) basket next year. It recently downgraded the forecast to an increase of about 1 per cent.

JLL, too, recently lowered its Grade A CBD rent growth forecast for 2023 to around 1 per cent – following two earlier downgrades from the 9 per cent 2023 growth figure it expected about a year ago, to 4 per cent in Q2 and 3 per cent in Q3.

The property consulting group’s head of research and consultancy for Singapore, Tay Huey Ying, said the downward revisions are “largely due to the unexpected turn in economic outlook for 2023 arising from the impact of the Russia-Ukraine war that began in early 2022, which accelerated interest rate hikes”.

Another key factor in the Singapore office market’s deteriorating outlook is the slowdown in demand from the tech sector, with recent mass layoffs and hiring freezes.

“Some players are gearing towards a smaller footprint in a bid to cut real estate costs,” notes Tricia Song, head of research for South-east Asia at CBRE.

“The tech sector has been a large occupier of office space, generating about 40-50 per cent of total gross leasing demand in Singapore over the past two years.”

Summing up 2022, Cushman and Wakefield’s Singapore research head, Wong Xian Yang, said: “The Singapore office market has swung from exuberance to caution amid a rapid rise of interest rates and inflation, and a recalibration of tech growth.”

The year began on a positive note with the reopening of the economy and the easing of workplace restrictions, culminating in all employees being allowed to return to the workplace from Apr 26.

Song of CBRE noted that leasing activity during the year was driven not only by tech firms but also the legal sector, flexible workspace operators and non-banking financial companies.

Tenants displaced from older office buildings to be pulled down for redevelopment – such as Clifford Centre and PIL Building – also contributed to the leasing momentum.

ByteDance and the tech demand storyline

Alan Cheong, executive director of research and consultancy at Savills Singapore, said: “In H1 2022, particularly in Q1 2022, rental increase got confounded by news of ByteDance’s insatiable appetite for prime office spaces and this emboldened (CBD Grade A) landlords’ resolve to raise rents.”

When news broke in Q2 of Amazon being in advanced talks and subsequently leasing some 369,000 square feet (sq ft) at IOI Central Boulevard Towers, which is under construction, “the tech-driven demand storyline got an extension of life as the big sponge for new office supply”, he added.

While the leasing of large office spaces by such big names made headlines, there was also a string of companies in the crypto space that, after obtaining Series B funding, decided to have their own offices rather than operate out of co-working joints.

“Bootstrapped to the demand coming from the smaller tech companies was the explosion of family offices from North Asia that leased Grade A CBD offices in Singapore,” added Cheong.

“Both these profiles of tenants often took spaces of 3,000 to 5,000 sq ft each; with smaller units, rents are often higher on a per-square-foot basis. We’ve heard of S$14-15 psf a month achieved for offices in the Marina Bay area.”

This new wave of demand for smaller units was a key factor for the rise in rents for Grade A CBD office space in 2022.

Then the tech demand story began to falter. Cryptocurrencies have been on the decline since the start of 2022, and the situation has worsened with a number of high-profile collapses such as Terra in May, sparking a contagion effect in the crypto ecosystem.

“Towards end-July, the crypto guys suddenly went silent, although this went generally unnoticed by office market watchers. It was only from late August that we began to see some tech companies starting to give up excess space,” said Cheong.

The phenomenon of shadow space has been gathering momentum since the start of October, he added.

Colliers’ executive director and head of tenant representation, June Chua, said: “It is reasonable to expect more shadow space to enter the market in 2023, as many companies are looking at adapting their office space to the new way of working, future-proofing the office space from an ESG (environmental, social, and governance) perspective, and some companies and industries will look at right-sizing their office to better manage their cost.”

Observers note that some tenants have been finding it challenging to persuade employees to return to the office more frequently.

For 2023, JLL’s Tay expects office demand to be driven by the financial services as well as the professional and business services sectors while demand from the tech sector normalises, after a period of exceptional growth sparked by Covid curbs which meant that people had to work, eat and be entertained more at home.

In a similar vein, Song of CBRE said that the drop in office demand from the technology, media and entertainment, and telecommunications (TMT) industry could be mitigated by medium-sized occupiers among non-banking financial institutions and law firms. Leasing enquiries from these sectors have become more active as they start reviewing longer-term space requirements.

“However, as their requirements tend to be mid-size, it will be insufficient to pick up the slack from weakening office demand in the tech sector,” she added. 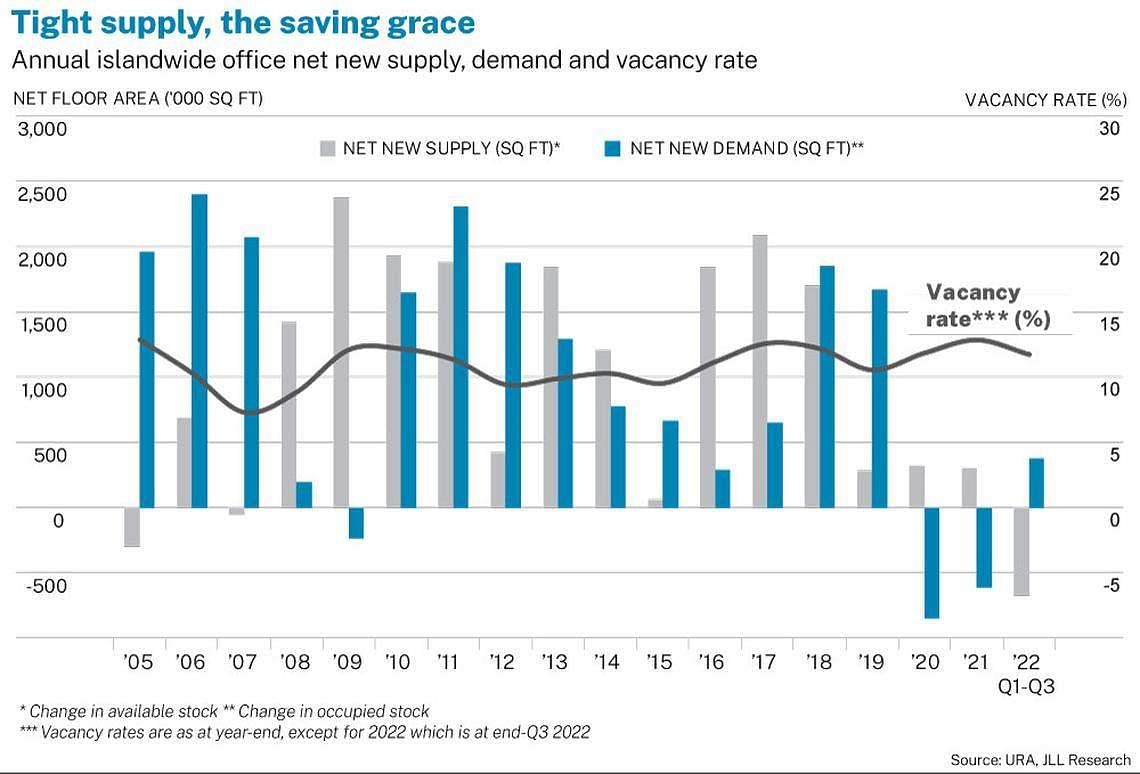 Cheong of Savills estimates that Q4 2022 could still turn in a small positive demand figure, taking the full-year tally to about +400,000 sq ft.

“That said, for our basket of Grade A CBD office space, we expect net demand to be about +550,000 sq ft on the back of expansions by family offices and other occupiers backfilling space vacated by tenants moving to newer buildings,” he added.

CBRE’s co-head of office services for Singapore, David McKellar, said: “Landlords with exposure to immediate-term availability may need to consider more competitive commercial terms in the near term to compete with additional competition in H1 2023.”

He added: “Occupiers will benefit from softer market conditions during this time, and we expect the market to return to growth in 2024.”

Highlighting a bright spot, Cushman’s Wong said: “The CBD Grade A office market is underpinned by a limited supply pipeline, with an expected 0.6 million sq ft of new stock (completion) per annum from 2023 to 2027, lower than the 10-year annual average of about 1 million sq ft.”

By Nisha Ramchandani, Business Times / 17-Oct-2022 Cushman & Wakefield data shows that CBD Grade A office rents rose 1.8 per cent quarter-on-quarter to S$10.35 per square foot (psf) per month in Q3 2022 while vacancy rates tightened to 3.6 per cent from 5.1 per cent in the last quarter Read More