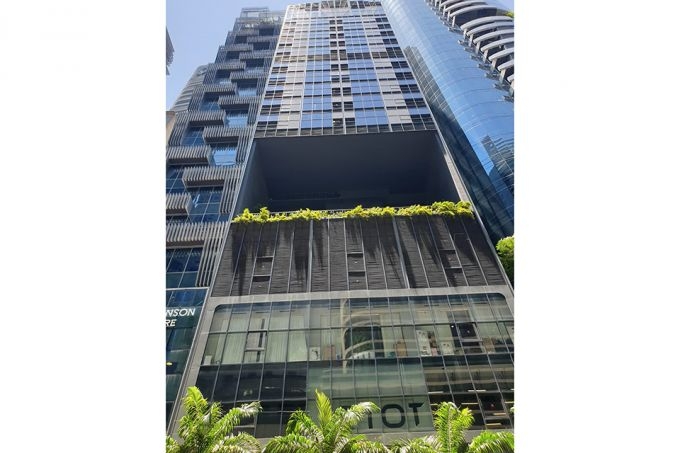 INDONESIAN tycoon Tahir is in the early stage of buying some 70,700 sq ft of freehold strata space - mostly offices - at Crown At Robinson for nearly S$260 million, The Business Times understands.

The price reflects about S$3,650 per square foot on the strata space - comprising 65 strata office units and 8 F&B/shop units.

The space being bought is equivalent to about 80 per cent of the total strata area as well as share value in the 19-storey building at 140 Robinson Road.

Tahir is buying the space from a unit of Wywy Group, which developed Crown At Robinson on the site of the former Chow House that the group acquired in 2010 for S$101 million, based on earlier media reports.

Crown At Robinson was completed about five years ago. Under the Urban Redevelopment Authority's Master Plan 2019, the site is zoned for commercial use with 11.2 gross plot ratio.

Michelle Lek of Quillion Global, a real estate investment advisory company serving ultra high net worth clients, is understood to have acted for Tahir in the transaction.

Tahir is the founder of the Mayapada Group, an Indonesia-based conglomerate with businesses in financial services, healthcare and property. His family has stakes in listed Bank Mayapada and Maha Properti Indonesia.

Tahir also has interests in media through Forbes Indonesia.

In addition, he holds real estate in Singapore, including through SGX-listed MYP, controlled by his son, Jonathan.

MYP owns the former Straits Trading Building, a 999-year leasehold 28-storey office asset at 9 Battery Road, which it bought for S$560 million in 2016 from Sun Venture Group. The property is now known as MYP Centre.

In his private capacity, the elder Tahir owns 110 Robinson Road (which he bought in 2016 from OCBC for S$45.1 million) and an industrial building in Playfair Road.

A Nanyang University business graduate, Tahir is also known for his philanthropic deeds, including in Singapore. The Singapore permanent resident is a son-in-law of Indonesian magnate Mochtar Riady.

Data compiled by JLL Research, which covers transactions of S$5 million and above, shows that so far this year, some S$2.6 billion in office assets have changed hands. The figure for the whole of last year was S$2.3 billion.