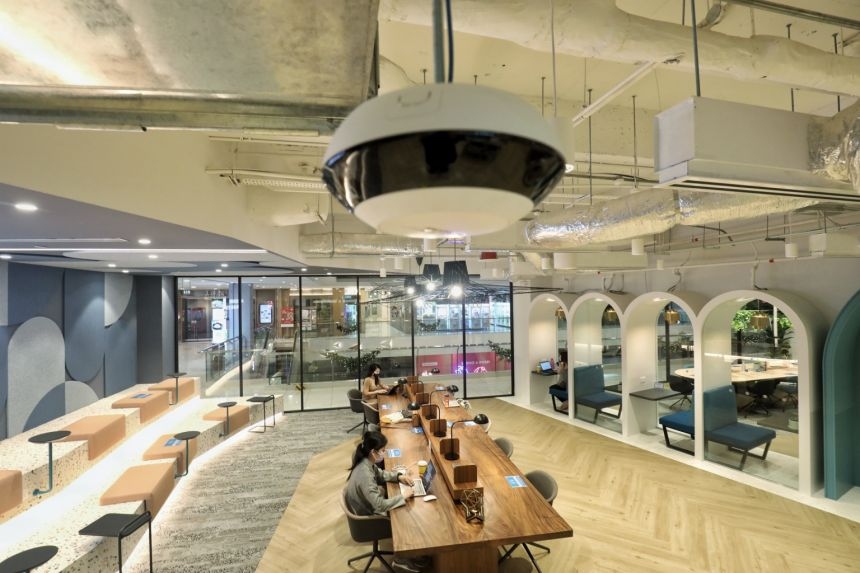 Demand for co-working spaces in Singapore has increased markedly in recent months with signs of economic rebound and more people back at work in the office.

International Workplace Group (IWG), which has 24 locations across its co-working space brands here, noted that occupancy of its space in the Central Business District shot up 28 per cent in December and January from previous months after the announcement of phase three of the reopening of the economy.

WeWork said its membership rose 20 per cent from January to last month. It also recorded a 30 per cent rise in members using their co-working spaces after the announcement last month that up to 75 per cent of workers could return to their desks from April 5.

The recent rise of Covid-19 cases in the community, however, led to the call last Friday for employers to allow staff to work from home if possible.

Any tightening of regulations would affect the use of co-working spaces, though it is too early to say how much they will be affected.

Much of the demand, though, for co-working spaces is driven by business optimism and companies turning to more flexible work arrangements, observers said.

"As the economy improves, and companies have a greater appreciation for business continuity and operational resiliency, we remain optimistic about the demand for flexible workspaces at Bridge+," he said.

Mr Brandon Chia, JustCo's vice-president and head of Singapore and Indonesia, noted that there has been greater demand for options in suburban neighbourhoods, which can help businesses decentralise their operations and facilitate remote working.

Its recently opened sites in Tampines and one-north could capitalise on such opportunities, he added.

"We are receiving slightly more inquiries, with clients telling us that the length of leases is not as important as the flexibility to upsize or right-size their office space as needed.

"This flexibility is what traditional office leases lack," he said.

Demand for co-working space has been higher in sectors such as healthcare, education, e-commerce, e-sports and financial services.

Standard Chartered Bank signed a global deal with IWG in January that allows employees access to the latter's 3,500 offices worldwide.

Ms Charlotte Thng, the bank's head of human resources for Singapore, Australia and Asean markets, said it started piloting a programme on April 1, in which 80 per cent of its 10,000 staff here have more flexible work arrangements.

The IWG partnership that allows the use of co-working spaces is part of the flexible work initiatives, which include logging in from home, she said.

"Our employees in Singapore can choose to utilise this service occasionally, should their current home environment be unconducive for work and if their job role allows them to do so," Ms Thng added.

Tech firm Affinidi has doubled its presence within WeWork spaces in under a year, the latter noted, adding that government agencies have also contributed to its growing membership.

WeWork is tracking "interest from enterprises in exploring hybrid and flexible workplace arrangements, as they continue to expand and establish regional hubs in Singapore", said Mr Samit Chopra, its managing director of international strategy and operations.

Analysts said they are bullish about demand for flexible workspaces, with the economy improving in Singapore.

Ms Tay Huey Ying, head of research and consultancy at JLL Singapore, said: "(Strengthened demand) will be underpinned by demand from occupiers who gave up some or all of their traditional office leases in 2020 due to the Government's work-from-home mandate."

She noted that these businesses are now "looking for a quick and flexible set-up to restart their physical office which they regard as still central for collaboration, creativity and culture building".

Commercial occupiers whose leases are expiring could also be attracted to explore locating fully or partially in flexible workspaces to stay agile, given lingering uncertainties around the pandemic, she added.

In the medium term, the flexible workspace industry "would benefit from the growing trend towards hybrid work ecosystems".

"From the operators' perspective, management contracts have become the preference as they look to continue expanding not only locally, but also regionally," he said.

JustCo, which opened nine new centres here and in other regional cities in the past year, is looking to expand further, with fresh locations in Singapore, Japan and other markets in the pipeline.

IWG's Mr MacAndrew said the flexible workspace model serves as a balance between the traditional office and working from home.

"Going forward, we do foresee a reorganisation of commercial space to meet the new way of work, and we anticipate that the demand for flexible workspace options will certainly continue to increase," he added.