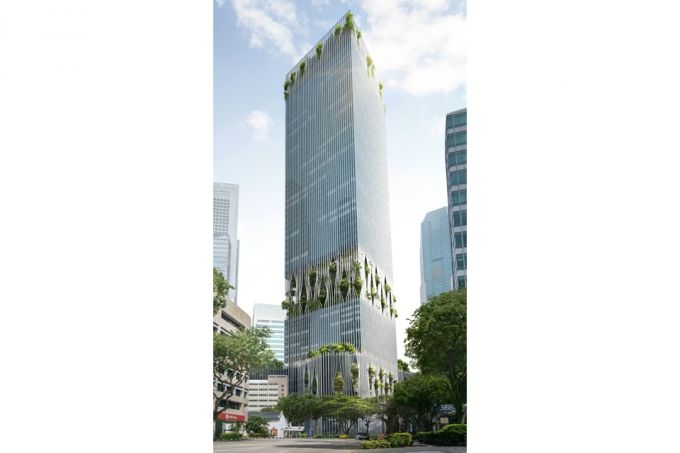 THREE years ago, it was touted as a development that would rejuvenate Singapore's central business district. But an upcoming building in the city-state could have fallen victim to the pandemic, which has upended the office market as work from home remains a long-term arrangement for some companies.

CapitaSpring, a 51-floor integrated development with JPMorgan Chase & Co as an anchor tenant, has only managed to secure about 38 per cent out of 647,000 square feet (62,600 square meters) of net lettable area. That's low considering it's 75 per cent completed.

Typically at that stage in pre-pandemic times, buildings would have leased out more than half of their space, three analysts said.

The building has attracted healthy interest from tenants and prospective clients due to the limited office supply in the central business district, Tony Tan, chief executive officer of CapitaLand Integrated Commercial Trust, which jointly owns the building, said in a statement on Tuesday.

"We are encouraged by CapitaSpring’s leasing momentum, which reflects the market's continued demand for quality workspace," he added.

The number of leases secured is still respectable, said Alan Cheong, executive director of research at Savills Plc. If there had been no pandemic, new Grade A CBD offices with a six-month timeline to completion would have secured 50 per cent of the space, he said.

"With many companies today still unsure of their office footprint moving forward, they are procrastinating on decision making," Mr Cheong added.

And in another sign that the health crisis has hit the commercial property sector, CapitaSpring's completion has been pushed back to the second half of the year from the first half. It's the only premium Grade A office development in the city's central business district that’s scheduled to finish this year.

CapitaLand, which jointly owns the building with CapitaLand Integrated Commercial Trust and Mitsubishi Estate, said that after including leases which are in advanced negotiations, the development is on track to get more than 60 per cent commitments by completion.

To date, committed office tenants are mainly from the legal as well as the banking and financial services sectors,
CapitaLand said in a statement on Tuesday. About 10 per cent of the office area in the building is set aside for flexible workspace.

JPMorgan became its first anchor office tenant in 2018, and the bank will take up seven floors.

While tech behemoths are expanding in Singapore, banks such as Citigroup and Mizuho Financial Group are cutting back office space in part due to the success of working from home, with such arrangements potentially to be long term.

Prime grade office rents in the Raffles Place and Marina Bay precincts contracted about 10 per cent in 2020, according to Knight Frank.

Early termination of spaces continued to rise in the fourth quarter of last year to an estimated 330,000 square feet from 260,000 square feet in the third quarter.  And the prospects aren't bright this year.

Knight Frank expects office rents in the city-state to decline by around 5 per cent in 2021 before bottoming out and recovering next year, it said in a quarterly report published on Monday. That's not taking into account if new virus strains could result in more lockdowns.

The property consultancy firm foresees lower net new demand for office space given that some companies have adopted a rotational remote working approach.

"The rethinking of traditional office space usage in an age of flexible work arrangements, and the casualties of the Covid-19 pandemic as the government withdraws business support measures, will likely add to contractionary pressures for office space," Knight Frank said in its report.

DBS Group Holdings and United Overseas Bank, two of Singapore's largest banks, have allowed employees to work remotely on a permanent basis, part of the major work-culture changes triggered by the pandemic.

In contrast to the office sector, Singapore's residential housing market is holding up. Home sales rose the most in six months in December, signaling the market has weathered the recession.

Authorities may be considering another round of measures to cool residential prices, according to market analysts.

By Writer Unknown, Business Times / 27-Jan-2021 Aims Apac Reit said this marks its first acquisition in a "city-fringe location", which has proximity and accessibility to the central business district Read More

Property consultants upbeat about Singapore office market in second half

Singapore's office market will never be the same again